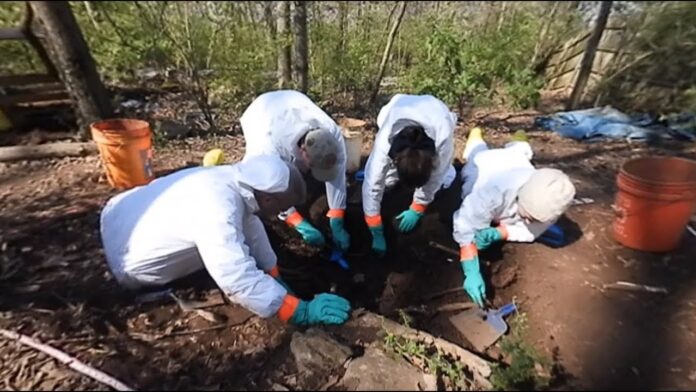 Police investigating the discovery of the Bones of a dead man found in Sudbury river found a year ago believe the victim may have died between 2008 and 2012.

A Home Office post-mortem examination conducted three days later was not able to establish a cause of death or any form of identification.

A small amount of additional human remains were recovered from the river a week after the bags were found, with DNA testing confirming that they were from the same person as the original discovery.

A 26-year-old man from Sudbury was arrested in connection with the find on May 25, but he was released under investigation.

Forensic tests have been conducted on the remains in the last 12 months and established that they belonged to an man of athletic build.

One year on from the shocking find, police have now revealed the victim was likely to have been aged in his late 50s to early 60s and was approximately 5ft 6in tall

Officers also believe the victim died at some point between 2008 and 2012.

Eamonn Bridger, Assistant Chief Constable of Suffolk police said: “A huge amount of progress has been made over the past year by everyone who has been working on this extremely complex murder inquiry.

“We said from the outset that this would be a long and methodical process and it has proven to be just so, especially due to the type of specialist forensic testing that has been – and continues to be – taking place.

“Many of the results that have come back then need to be subject to further tests, so we still have a distance to go.

“However, we have received many positive and helpful results, including the approximate age of the victim and dates between which he is believed to have died.

“We remain grateful to all the members of the public, experts, specialists and partner organizations who have, or continue to, assist us with this investigation.

“I would like to repeat my appeal from last year for anyone who knows anything about this discovery to come forward.

“If you have concerns over a male relative, friend or colleague you haven’t seen or heard from, since between 2008 and 2012 and who was aged in their late 50s or early 60s at the time, then please contact us.

“Equally, if someone you know was acting suspiciously or displayed a real change in their character in the days and weeks before – and after – the discovery which gives you concern, then please come forward and talk to us.

“Any information you provide will be dealt with in confidence.”